Turnip Greens started as a contest that Hawk and I entered to see if we could get into syndication.  We made the top 250, but lost out in the end.  However, I have some feelings for this endeavor between the two of us because it brought to light a lot of the things we experience as a couple but don’t necessarily talk about.  This story is truly a “what if”, as we are settled in California now and not in the South as these two characters have.

The characters themselves aren’t meant to be modeled after us.

Dorothy is a social worker who was born and raised in the southern part of the United States.

Sahmir is a mechanic that can work on both foreign and domestic cars, he’s a real handy-man.  He hails from a metropolis to the north, also American born, but the son of parents from South Asia.

As the writer, I can’t really nail down what this comic strip is about.  You could say it’s a look at interracial relationships, multiculturalism, inter-faith and a whole host of other issues that come up in this melting pot of a world.  Ultimately, it’s about two people’s lives and whatever you take away from peeking into their world is fine with me.

It’s been on hiatus for awhile due to several moves in my life, but will be picking up this year 2011.

You can begin here. 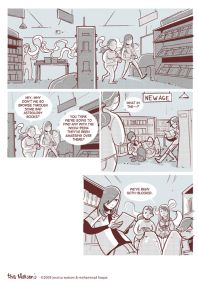